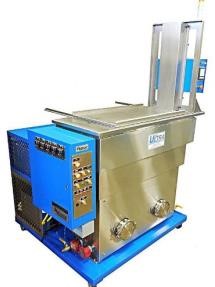 Ultrasonic cleaning in your vapor degreaser should strongly be considered if you have any of the following conditions or concerns:

By introducing ultrasonics into the vapor degreasing process, the capability of the system to clean in the previously mentioned contexts is dramatically improved. At a micro level, intense activity on the surface of the parts is possible to physically displace and dislodge hard to remove insoluble contaminants as well as reach blind holes, threads and cavities that conventional solvent vapor degreaser cleaning would have difficulty reaching and cleaning. In addition, in many instances, the rate at which organic contaminants are cleaned is accelerated by the ultrasonic process.