Vapor Degreasing is a powerful, efficient cleaning & degreasing process that in a matter of seconds removes contaminants like machining oils, cutting fluids, waxes, flux, and many more via "solvent cleaning". Many industries from electronics firms to aerospace companies to metal fabricators use vapor degreasing to precision clean metal and machined parts. Because of the comprehensive and fast cleaning capability combined with no need for rinsing and drying - vapor degreasing is a valuable part of any manufacturing line. Vapor degreasing utilizes non-flammable, non-hazardous solvents that can be recycled and reused for reduced operating costs.

There Are Three "Versions" of Vapor Degreasing Equipment

These vapor degreaser systems are considered "single-sump" systems in which the solvent is boiled at the bottom of the sump or tank until it turns to vapor. The parts are cleaned by the vapor made by the boiling solvent in the "vapor zone". Most vapor only units come with a manual spray wand which is used for additional part cleaning.

Vapor degreasing systems with immersion capability are considered "two-sump" systems and have two(2) solvent-filled sumps (the boil sump and the cold sump). The boil sump is heated to boil the solvent which creates the rich "vapor zone" that is used to clean parts. The cold sump is always filled with clean, "distilled" condensate solvent that can be used for immersion cleaning of the parts and "multi-dipping" of parts to enhance the cleaning capabilities.

The two sump vapor degreasers can also be equipped with ultrasonics which give additional cleaning capabilities.

How Are the Parts Cleaned?

The solvent is boiled at the bottom of the sump or tank until it turns to vapor. The vapor is contained by refrigeration coils at the top of the tank. The refrigeration coils cool and condense the solvent back to its liquid form for filtering and reuse. Cleaning is accomplished by lowering a metal basket filled with dirty parts into the "vapor zone". The parts are cleaned by the vapor (which is always clean) made by the boiling solvent which envelops the entire part and takes the containment into solution. Unique to a vapor degreaser, large amounts of clean vapor are generated perpetually for vapor cleaning. Once the part comes up to temperature of the boiling solvent, the vapor cleaning is done and the contaminant drops back into the tank to be distilled and reused for the next vapor cleaning. In "2 sump" systems, the parts can be immersed into the solvent bath and/or have ultrasonic cavitation applied for additional cleaning. 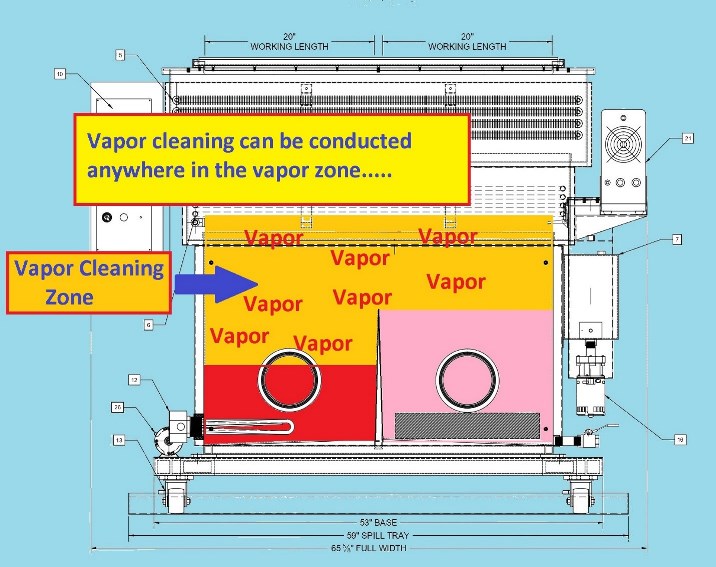 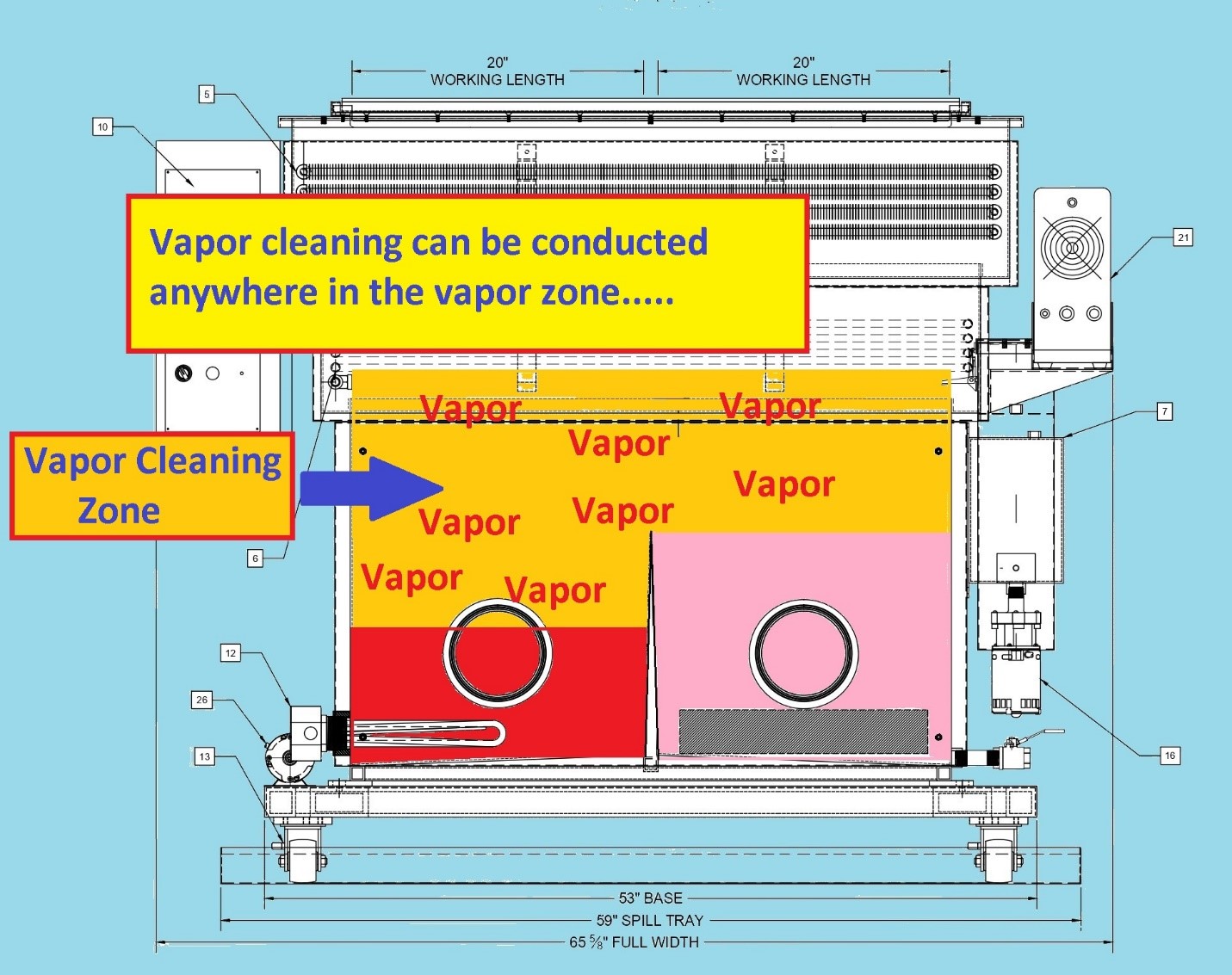 How Does a Vapor Degreaser Work? 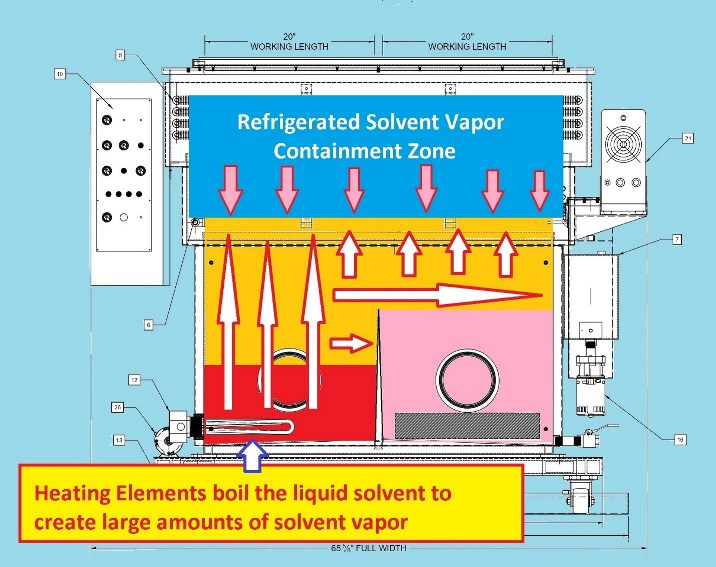 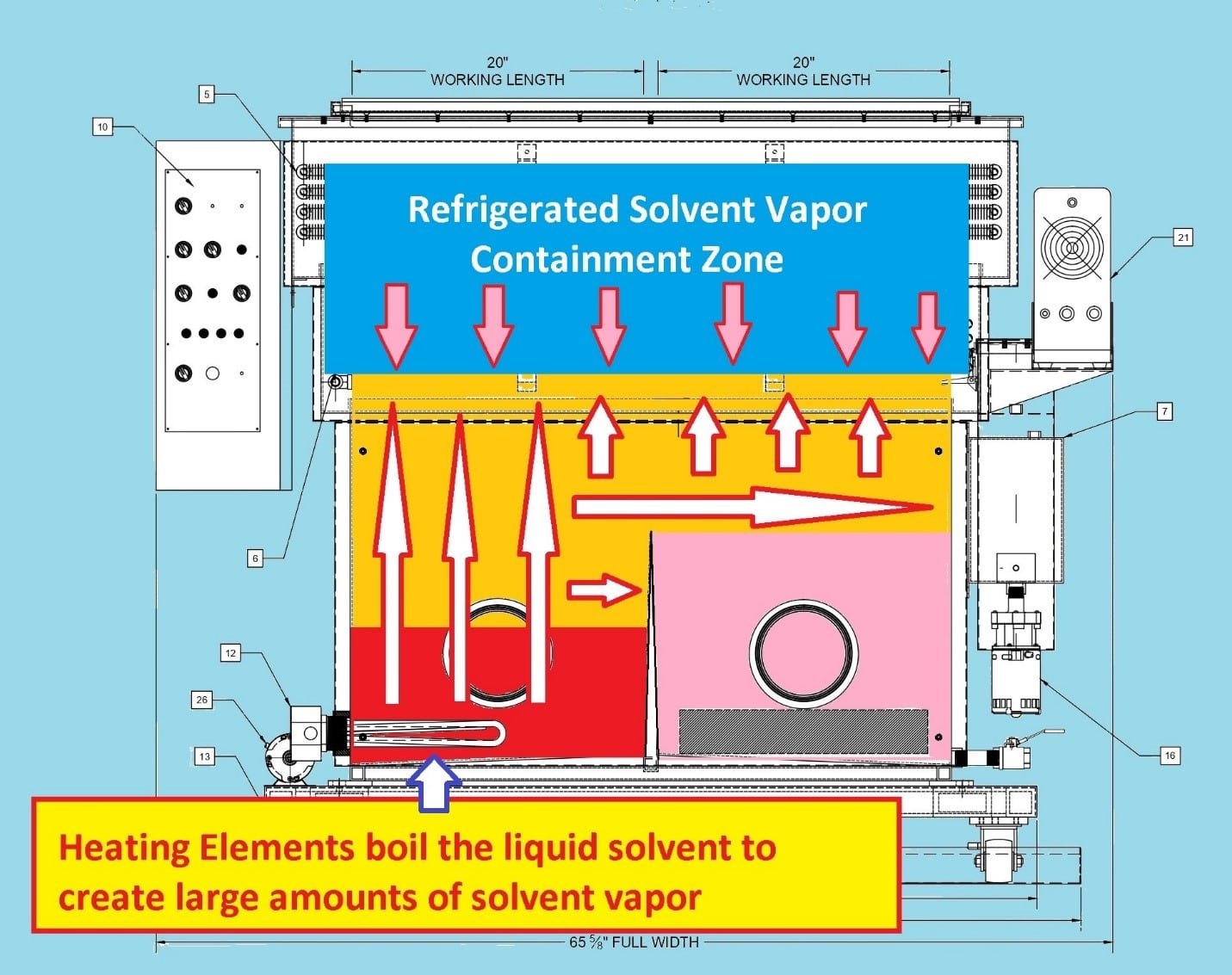 Industries that Use Vapor Degreasing

Vapor Degreasing Solvents must be non-flammable and azeotropic (meaning that the mixture has a constant boiling point and composition throughout the cleaning).The solvent needs to be non-flammable because you have heating elements heating the solvent to boiling. So solvents like acetone, IPA, and any flammable solvent cannot be used. And Azeotropic because the solvent is being distilled as part of the vapor degreaser operation. Solvents that break down in distillation will not provide continued cleaning capability.

The chlorinateds have been around for decades and have a higher boiling point than the newer generation of solvents. They are effective cleaners, they are non-flammable and stay azeotropes; however, they are considered carcinogens and have heavy regulations around their shipment, use, emissions and disposal. Cholorinateds are NESHAP (National Emission Standards for Hazardous Air Pollutants) regulated. With that said, many companies still use chlorinateds like trichloroethylene (TCE), n Propyl Bromide (nPB), Methylene Chloride (MC), and Perchloroethylene (PERC).

n Propyl Bromide (nPB) has been used to replace the chlorinated solvents for quite a while. It too is non-flammable and stays an azeotrope. nPB has a lower boil point than TCE or PERC and is not NESHAP regulated. It is considered a probable carcinogen. However, it has less regulation around shipment, emission and disposal.

The newest vapor degreasing solvents coming to market are fluorinated based. These solvents have much lower boiling points but are considered to have better health and safety profiles while still being non-flammable and staying azeotropes. There are few restrictions around shipment, use, emission and disposal.

Considerations for Purchasing a Vapor Degreaser