Reliance Specialty Products wants to let you know about regulatory changes that are happening with n-Propyl Bromide and how we can help if you decide you want to switch-out of nPB or improve your cleaning equipment.

How Reliance Can Help:

nPB is now considered a HAP under NESHAP. AeroTron™-100 is a direct nPB replacement that does not require permits or reporting.

As a side note:
No solvents have otherwise been added to NESHAP since it was originally enacted in the late 1990's - so no one knows what the requirements will be or what the timeframe for issuance is. However, we anticipate that the use requirements will be similar to TCE, PERC and Methylene Chloride that were part of that early regulation.

Implications of NESHAP Regulation of nPB

First, there are Air Permitting and State Reporting Impacts

nPB was formerly only a VOC (Volatile Organic Compound), but not a HAP under NESHAP. Therefore, the type of operating permit you currently have is likely a simple air-operating permit for VOC emission. If you decide to stay with n Propyl Bromide, you will need to switch-over to a HAP operating permit.

The HAP permits typically are more expensive and require periodic reporting to establish compliance with the HAP requirements and report the amount of HAP's emitted. HAP permits also require more comprehensive vapor degreaser containment features and operating procedures. As mentioned earlier, specific requirements under the NESHAP regulations for nPB are not yet issued.

Also, each state's DEQ, Department of Environmental Quality, will need to address the re-permitting and final reporting requirements for nPB now that it is a HAP.

The second implication of NESHAP is Shipping Classification Impacts

nPB is currently not regulated for shipment. However, it is likely to be classified by the DOT as hazardous for shipment at some point and treated in the same manner as TCE, MC & PERC. Our understanding is that this will occur as a separate action by the DOT (Department of Transportation).

The third implication of NESHAP classification is Waste Disposal Impacts

You can continue use nPB. Companies have been using TCE, PERC and MC under NESHAP for 25 years. And NESHAP in and of itself does not preclude continued use, it is just more involved.

Immediately, the main issue with nPB is your state air permitting (as discussed earlier). Since each state handles its own air VOC, HAP permitting, you will need to check with your state for their immediate requirements for re-permitting of nPB.

The regulation of nPB, TCE, PERC and MC is underway under TSCA 6A, the Toxic Substances Control Act. This regulation gives the US EPA broad authority to regulate - and is capable of resulting in a phase-out or ban of n propyl bromide or any of the other solvents they are considering. A ban, if it occurs, would likely have a phase-out period.

TCE a couple of years ago was proposed banned for vapor degreasing. The USEPA Proposal was 18 months for phase out of manufacturing and a 36 month phase out for use. Thus, there was a 3-year period. The earlier proposal for TCE was withdrawn and is now again going through the process under TSCA 6 A along with nPB, PERC and MC.

Proposed regulations under TSCA 6A for nPB, TCE, PERC and Methylene Chloride are expected to be issued this year 2022.

There is no immediate need to move out of nPB, but you may need to change permitting immediately or when your State otherwise requires it. You will need to comply with the HAP permit reporting. The TSCA 6A is still in process and what the regulation of nPB will be under that regulation or if a phase out is part of it is unknown.

Here is how Reliance Can Help:

First, we can help you switch into AeroTron™-100, a safer solvent, as we have done for many of our current nPB customers. AeroTron™-100 is the next generation solvent that is a direct, drop-in replacement for nPB.

Next, Reliance can also help you with assessing your current vapor degreaser and recommending upgrades or modifications.

Reliance takes a comprehensive approach to helping you assess your situation and your options.
We look forward to working with you.

Cleaning of potting and masking waxes and fingerprints.

Getting Started with AeroTron™-100 Is Easy!

With these Performance Validation Options:

Easy Change Over From NPB to AeroTron™-100

No special ASTM procedures are needed to use AeroTron™-100 as a replacement for nPB.

Use AeroTron™-100 As An Alternative to nPB for Asphalt Extraction

AeroTron™-100 can be used as effectively as nPB in asphalt extraction.

As part of our comprehensive solvent support, Reliance Specialty Products provides a free to use AeroTron™-100 spent solvent waste disposal program. This program ensures your solvent is disposed of properly and ensures a responsible end to your solvent usage. 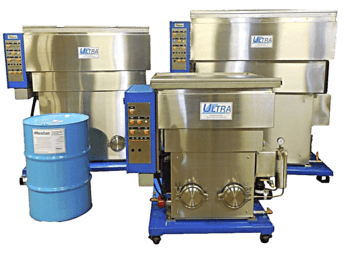 Reliance Specialty Products is the world-class leading manufacturer of both vapor degreasing equipment and vapor degreasing solvents. At Reliance, we take a comprehensive, systemic approach to solvent parts cleaning. Our vapor degreasing equipment manufacturing expertise combined with our years of working with a variety of solvent cleaning options make us able to support our customers in a variety of practical ways. We are here to help you easily switch over to AeroTron™-100 and support your transition into an effective solvent that is better for your company, your people and the environment.